At this time, we only offer trips for individuals and couples. We are happy to customize a field trip for you. Please send us a request via email: rawsbb@mac.com 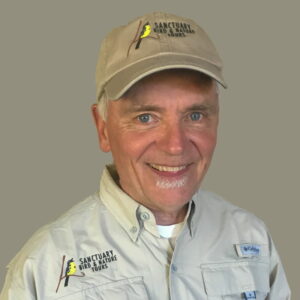 Sam Burckhardt was born in Switzerland in 1957 and spent the first two years of his life on the grounds of the Swiss Ornithological Institute near Lucerne where his father worked as the assistant to the director. In 1959, his father became executive director of the Swiss Nature Conservation League (now Pro Natura) and moved the family to Basel where Sam grew up and finished high-school. Sam studied cultural anthropology at the University of Zurich and as part of his studies spent a year in Burundi, Central Africa. From an early age, he had a keen interest in birds and nature, as well as in music. While still in high-school, he had the opportunity to play with legendary Chicago Blues singer and pianist Sunnyland Slim. In 1982, Sam came to Chicago and joined Sunnyland’s band as its saxophonist. He worked with Sunnyland until his death in 1995. In 1994 he helped to form a band called the Mighty Blue Kings which quickly became very successful and sold over 70’000 copies of its debut album “Meet Me In Uptown.” Sam is still recording and touring, and in addition to Sunnyland Slim has performed with such Blues and Jazz greats as Hubert Sumlin, Jimmy Rogers, Pinetop Perkins, Zora Young, Othella Dallas (formerly with Duke Ellington’s band), and Maria Muldaur, to name just a few.

Sam never lost his interest in birds and became involved in the birding community in Chicago. He served on the board of the Chicago Ornithological Society for several years, and led many field trips for various organizations. He also helped initiate a school program “Birds In My Neighborhood,” for Chicago Public Schools, to expose grade-school children to birds. Over the years, he worked on various bird censuses. Sam is involved in eBird, as reviewer for records covering Switzerland.

In 2011, his spouse Richard Wilson and he purchased a property in East Tawas, MI. Very quickly, Sam started exploring the rich natural diversity of Iosco County and neighboring counties. He befriended local birders and became a member of the AuSable Valley Audubon. As such, he has led field trips for AVA, the Tawas Point Birding Festival, as well as the Midwest Birding Symposium. He takes a particular interest in the Kirtland’s Warbler, and became a member of the Kirtland’s Warbler Conservation Team. Since 2018 he has helped with fieldwork for Nathan Cooper’s study on Brown-headed Cowbird parasitization of Kirtland’s Warbler nests. In 2020 he joined the board of Michigan Audubon.

What are people saying about Sam?

“If you don’t already know the name Sam Burckhardt, you’re about to be guided by a world-class birder, who is a wise and gentle teacher as well.”  ~C and Y. A.

“We had the benefit of all your knowledge of the birds––our tour with you netted 61 species––we did the exact same walk ourselves the next day and had 32 species.”  ~ M. H.

“As I had only two days of birdwatching scheduled I wanted to get the help of someone who knew the best birding spots and who was familiar with American bird calls and in particular the many warbler species. I could not have made a better choice; Sam proved to be a real expert. Not only did we see plenty of migrating warbles, most of which I would have had to leave unidentified, but also visited several excellent spots in a rather short time. Sam’s expertise is not only limited to birds. He is great with butterflies and dragonflies as well. Furthermore he knows the scientific names of the birds, which made it easy for me to relate the birds to, for me more familiar, European species. Sam is fun to talk with and you get to hear interesting stories while birding with him.”  ~ J. L., Finland